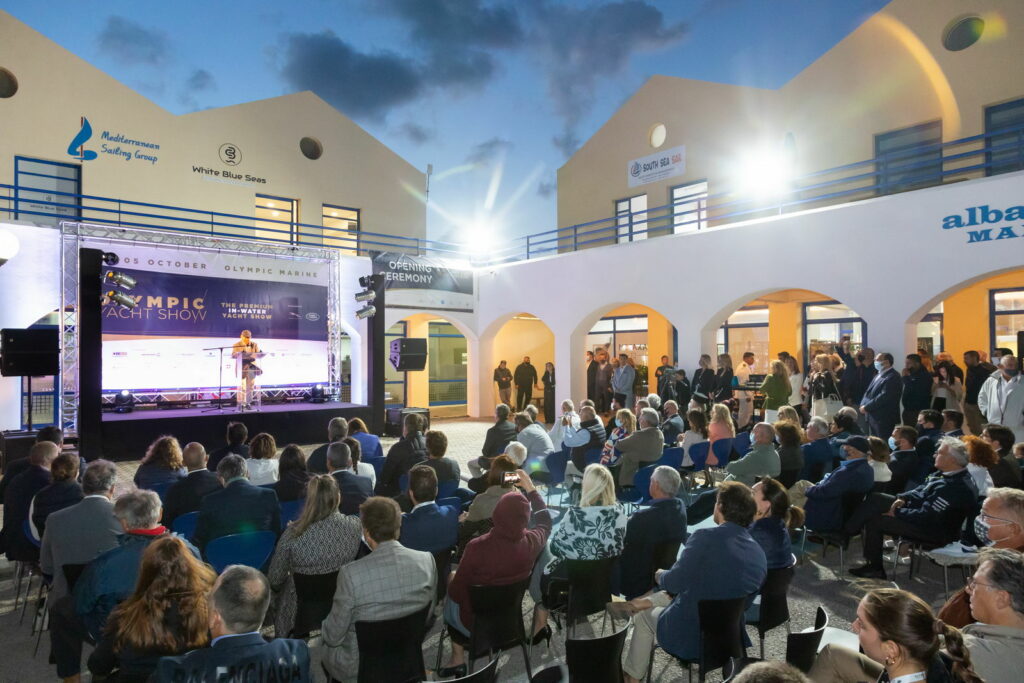 Boasting beautiful boats by leading companies and eye-catching elegant booths, the Olympic Yacht Show opened its gates on October, 1 at the Olympic Marine in Lavrio with a spectacular opening ceremony. Visitors to this great yachting event which is scheduled to last until October, 5, now, after several years, have the opportunity to be welcomed on boats in their natural environment. Meanwhile, on land they are given information about yachts and cutting-edge yachting equipment. 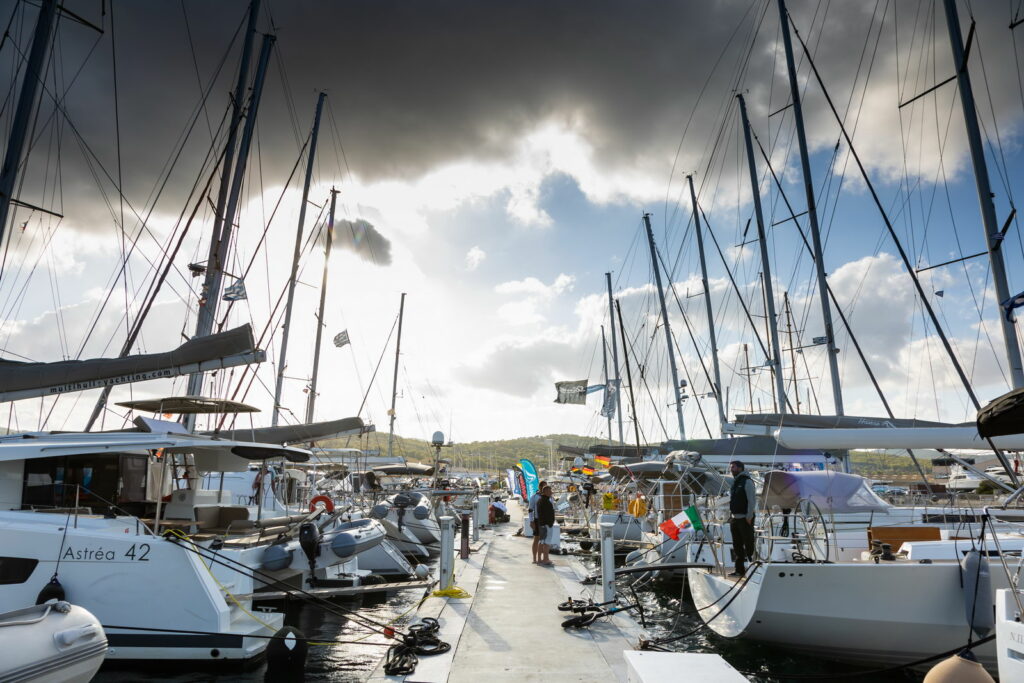 The Olympic Yacht Show aims to help boost the country’s quality tourism and show its potential in the niche. “After four years of consistent and hard work I stand here with people who share the same vision. Our wish is to make the Olympic Yacht Show a hub where professionals, designers, shipbuilders, and yachting enthusiasts will have a chance to converse. That is, we aim to turn it into a diverse communication platform based in Lavrio and Sounio, which is the gateway and crossing point to the most beautiful island complex in the world,” said Gerasimos Gerolimatos, Director of ONDECK Events and the mastermind of the Yacht Show.

The Show is organized by ONDECK Events in collaboration with Olympic Marine SA, one of the best organized marinas in the Mediterranean. “I am very happy and proud to see that this Show is the result of the joined efforts of so many professionals and exhibitors. Many years have passed since the last time a similar exhibition took place in Greece. The people of Olympic Marine love what is happening here and this is why we offered our support, because our home is the sea. The land is more of a branch for us. We are people of the sea and that is why we must support such efforts. You see, this is the breeding ground for tomorrow’s yacht owners and shipowners. I started from sailing. That’s how I came to experience the sea. Yachting functions as a financial link for our country while sea tourism is a key part of tourism. Thanks to its beautiful islands, Greece can become an international yachting hub, so we can be the market leaders in yachting just as we are the market leaders of merchant shipping,” said the owner of Olympic Marine SA, Mr. George Prokopiou 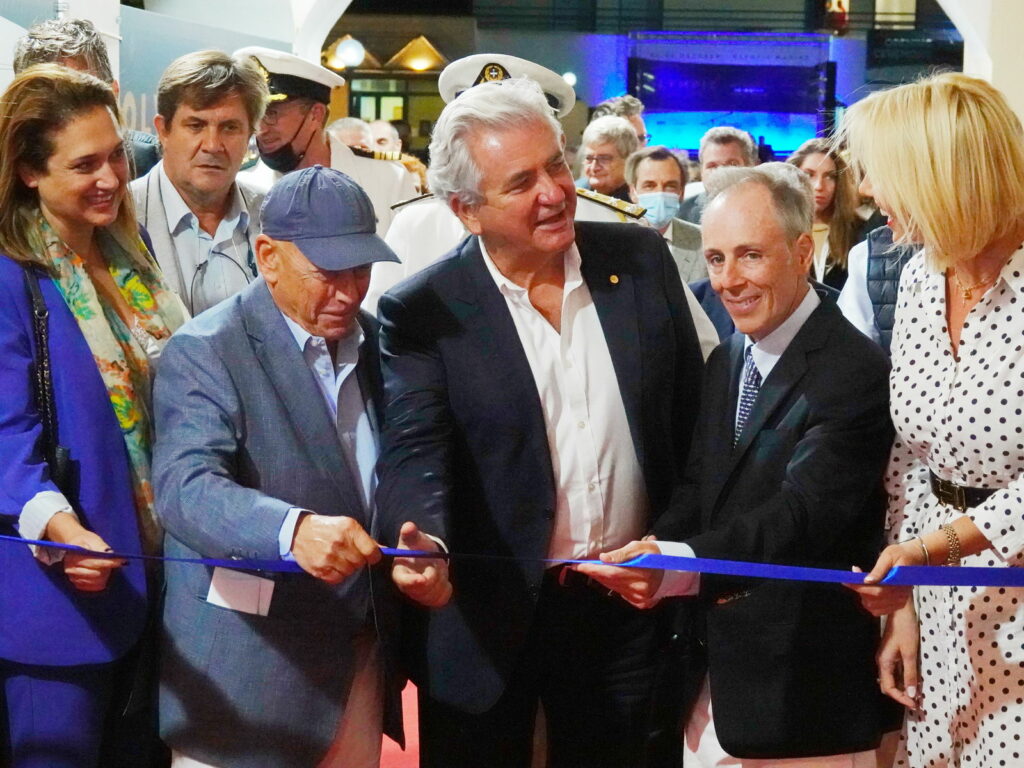 The opening ceremony was honoured by representatives of the Greek world of politics and business. The Ministry of Maritime Affairs and Insular Policy was represented by the Secretary General Mr. Evangelos Kyriazopoulos who noted that “yachting exhibitions, like this one, are very important for our country because they significantly upgrade the element of quality in sea tourism. The Greek seas are ideal for leisure boating. Thus, initiatives like the Olympic Yacht Show are crucial for the development of this tourist product which our country is in great need of.”

The Ministry of Tourism was represented by the Secretary General for Tourism Policy and Development, Ms Vicky Loizou: “This is of primary importance because after a long time we, at last, have a leading yachting show. Sea tourism is a priority for the Ministry of Tourism and that is why we have secured large investments.” 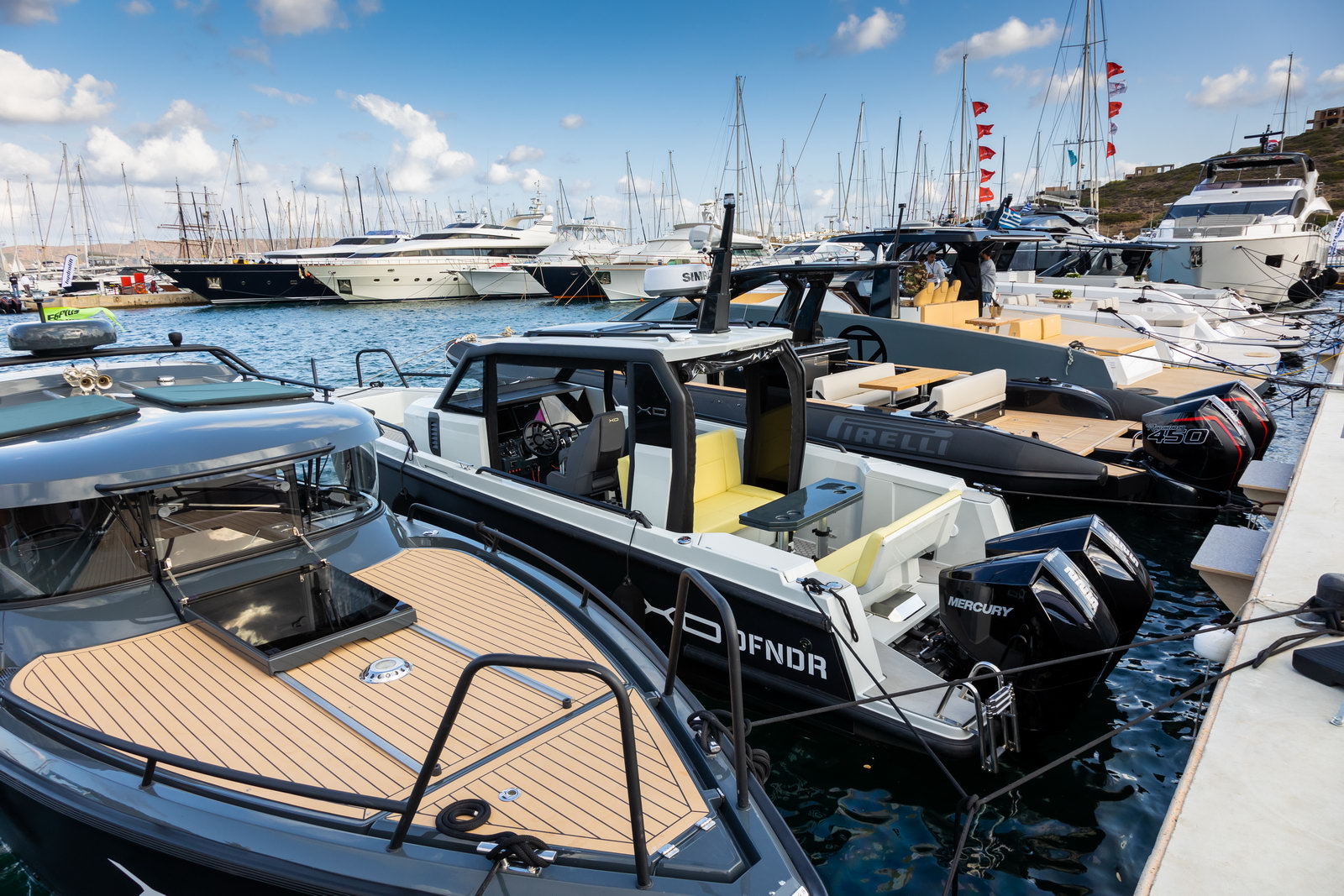 Ms Katerina Monogiou, MP of the New Democracy party representing the Cyclades, talked about the potential of the yachting sector in Greece: “Our country is surrounded by sea. It has beautiful islands and an impressive coastline. There are immense opportunities for growth and events like the Olympic Yacht Show promote Greece abroad and strengthen tourism. I hope it gains the status of an institution and stands out in the world map of events.”

The contribution of the Olympic Yacht Show to the promotion of local tourism and financial growth in the region of Lavrio is immense. “The Olympic Yacht Show is of great importance for Lavrio and Attica in general. It can be a great opportunity for the tourist promotion of our country, especially with regard to the region of Lavrio, which we aspire and want to turn into one of the gateways to Attica. Lavrio has a beautiful port, and a beautiful city with hospitable people,” stressed the MP for Eastern Attica, Mr. Vassilis Oikonomou.
The organizers’ ambition is for the Olympic Yacht Show to become a pillar for the development of quality tourism in the country.” The famous port of Lavrio and the amazing marina of Olympic Marine can become the base for even greater tourist promotion and the further development of sea tourism,” noted the Regional Vice-Governor of the Prefecture of Attica, Mr. Nikos Peppas.
. 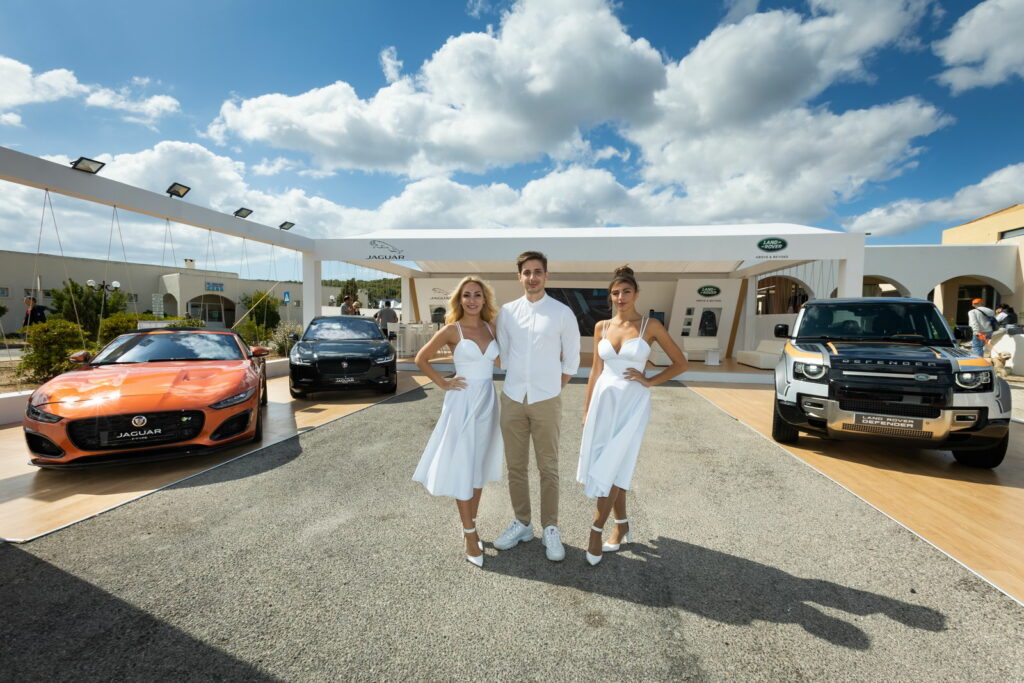 The Show’s parallel events will strengthen the local economy and highlight the potential of the region for the international development of sea tourism. “The Olympic Yacht Show is a truly important event. Our city has now opened up to the world“, underlined the Mayor of Lavreotiki, Mr Dimitris Loukas.

The Olympic Yacht Show is organized by ONDECK Events in collaboration with Olympic Marine SA, one of the best organized marinas in the Mediterranean. It is held under the auspices of the Ministry of Maritime Affairs and Insular Policy, the Ministry of Tourism, GNTO, the Prefecture of Attica and the Municipality of Lavreotiki. 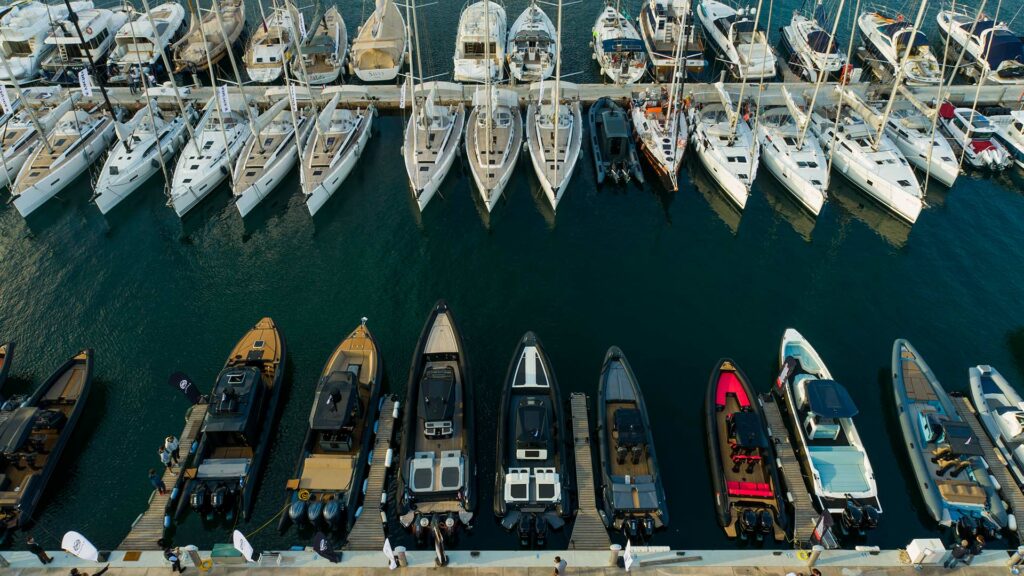 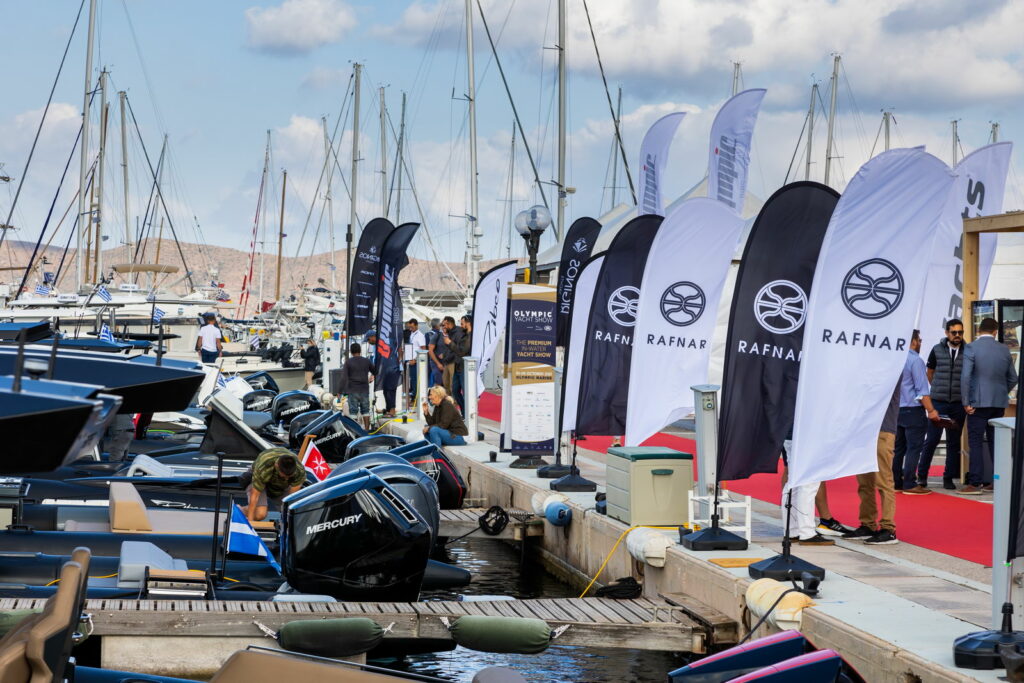